A combination of market forces has converged, creating a “perfect storm” to drive down resale values for pickup trucks by 15-25 percent. These convergent forces are higher fuel prices, tighter consumer credit, and a stagnant construction market. As a result, the buyer pool (hence market demand) for used trucks has contracted, putting downward pressure on resale prices. “The values of larger, less fuel-efficient vehicles, such as full-size pickup trucks, have been declining across the board since the beginning of the year at a rate far above their historical averages,” said Ricky Beggs, VP and managing editor of Black Book. Some of the hardest-hit models have been ¾-ton and 1-ton pickups powered by diesel engines.

“The market decline started last September with the subprime debacle and now it’s everything — fuel prices, high commodity prices, near-record low consumer confidence, the credit crunch — basically the overall economy,” said Dave Nagy, VP of asset management for Emkay. “There has definitely been a market shift. What are selling now are vehicles under $8,500 and small cars. Everything else is a struggle.”

In the July timeframe, resale values for large SUVs have dropped 27-29 percent compared to same time last year, primarily due to the high cost of fuel. “Pickups and vans are also affected by higher gas prices, but the larger underlying issue for them is the housing market and lack of work for independent contractors and small businesses,” said Bob Graham, director, vehicle remarketing for Automotive Resources International (ARI). Consumer preferences are also changing and many consumers are purchasing crossover vehicles instead of SUVs. “Better than a third of all crossover buyers replaced a truck-based SUV in 2007,” said Art Spinella, VP of CNW Research.

Wholesale resale value for cargo vans has also declined. In addition to a soft economy, there is an oversupply of cargo vans in the wholesale market, primarily the result of short-cycling by many fleets. “Because of market’s huge increase in supply, we have seen demand drop off considerably for cargo vans,” said Darrin Aiken, assistant vice president of remarketing for Wheels Inc.

Despite these dramatic declines in resale values, most fleets benefitted from generous fleet incentive programs in effect two and three model-years ago, which is helping keep depreciation at reasonable levels, said Aiken. 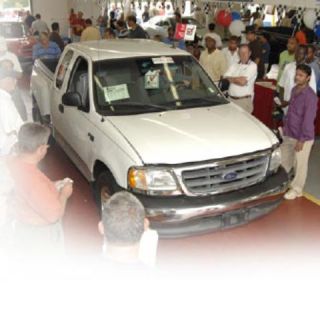 In recent years, many companies have seen a doubling in overall fuel expenses. Especially hard-hit are truck fleets as the cost of diesel has risen at a faster rate than unleaded gasoline. Although the price of fuel is dissuading some consumers from buying used trucks, most used fleet trucks are acquired by tradesmen. The economy is a much bigger impact on their buying decisions. “Fuel costs are definitely contributing to lower sales; however, the state of the overall economy, unemployment, and housing slowdowns are directly impacting new- and used-truck sales,” Paul Seger, VP of asset remarketing for GE Capital Solutions Fleet Services.

The ongoing new-home construction slowdown has especially impacted work trucks and cargo vans, hurting contractors and tradesmen who generally buy these vehicles. Many used-truck buyers in the construction market are deferring purchases. “As the construction market has continued to decline, finding the right buyers for these ready-to-work vehicles has become more difficult,” said Aiken.

Another market force exerting downward pressure on used-truck prices is the tightening credit standards for auto loans. The bread-and-butter customers for out-of-service fleet vehicles are generally buyers with C and D credit, namely subprime buyers who buy from independent dealers. These dealers are having difficulty getting subprime customers financed. Increasingly, retail buyers of used vehicles are not qualifying for lower-interest, short-term auto loans.

What’s Over the Horizon?

Another reason for the premium prices is the limited supply of four-cylinder models. “We just aren’t seeing a lot of these vehicles in the wholesale market right now,” said Aiken. Likewise, hybrid vehicles are doing extremely well in the resale market. “Hybrid vehicles are one of the few bright spots in the market. Their premium over similar gasoline-only versions has increased dramatically in recent wholesale transactions,” said Beggs.

What is the forecast for truck and SUV resale values for the balance of the year? “Personally, I think the market has overreacted to the large SUV, and in some respects, to the large pickup. I think you will see some lift in value on those units in the fall, probably in the neighborhood of 5-10 percent. I think heavy discounting on new SUVs and pickups by the manufacturer will affect this market at least for the balance of the year and maybe beyond, depending on future oil prices,” said Nagy.

However, other remarketers are not upbeat about the near-term prospects for an upturn in resale values. “My forecast is that the market for both pickups and SUVs will stay depressed,” said Graham. “I would caution sellers to be prepared for it to get even worse later in the year.” Aiken shares a similar assessment. “I think the fall market will collapse fairly quickly.”

Seger describes his resale market outlook as extremely conservative. “Buyer demand is still down. Until fuel costs remain consistent for a period of time and the overall uncertainty in buyers’ minds is removed, this segment of assets (trucks and SUVs) will continue depressed and challenging to remarket,” he said.

One possible silver lining for the future is that the current decreased volume of new-truck sales may result in a shortage of used trucks two or three years from now, said Aiken. “When there is a decrease in supply in the wholesale market, resale prices increase. We saw that in the early 1990s. We could see it again.”