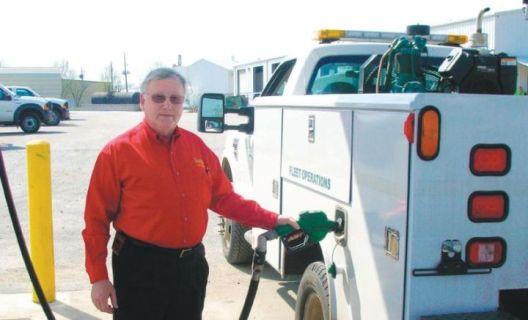 Fleet Operations Superintendent David Bragg orchestrated the conversion of the City of Fayetteville, Ark.’s diesel-powered vehicles to biodiesel. The City implemented ASTM-certified commercially produced biodiesel into its fleet only after completing a lengthy research process.

Now, 70,000 gallons of petroleum fuel is replaced with B-20 annually, saving the City 2.4 cents per gallon. A new, more competitive gasoline and diesel contract saves 3 cents per gallon over the previous contract for total savings of $13,500 annually.

The City also implemented what may be the first biodiesel dispenser in the United States capable of blending ratios at the dispenser. In recognition of this accomplishment, the NAFA Fleet Management Association presented its Larry Goill Award for Quality Fleet Management Ideas to Bragg at the recent NAFA Institute & Expo in Salt Lake City.

This new idea has saved Fayetteville, the third largest city in Arkansas, thousands of dollars when compared to the expenditure of gasoline or hauling fuel to another site.

If the price differential between diesel and biodiesel holds, the City plans to increase to a B-50 blend in the summer months.

"Fayetteville, as a university community, was environmentally conscious even before it was popular," Bragg said. "Under the leadership of Mayor Dan Coody, we are a national leader in sustainability efforts."

One of the City’s main goals was to use only ASTM-certified biofuels to ensure that it achieved the best reported emission benefits.

"We’ve already received positive comments from the public regarding reduced smoke and odor from our diesel equipment," Bragg said.

Fuel pumps in Fayetteville were previously located at the fuel supplier’s site and connected directly to bulk storage tanks. Bragg said the fleet was billed daily for fuel pumped, and the site was approximately three miles from the fleet maintenance facility.

"The distance was causing substantial loss in mileage and crew time," Bragg said.

The fleet operations was looking to discontinue use at the facility and build a new facility at the City’s on-site fleet location. And in June 2007, after several months of an engineering and bidding process, the City of Fayetteville opened its new fuel facility and began pumping a B-20 blend into all diesel-powered equipment, slightly over half of the fleet, amounting to two-thirds of total fuel use.

Due to shipping distance from biodiesel producers, a separate pure biodiesel storage tank was installed, and full tanker loads are purchased from the producers.

The fuel is blended with premium diesel inside a dispenser at a ratio programmed by management. To the City’s knowledge, it operates the first biodiesel dispenser capable of blend-at-the-dispenser in the United States.