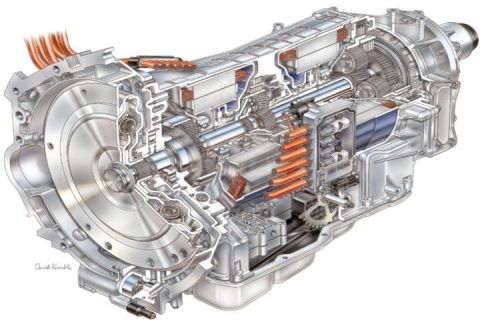 General Motors created somewhat of a sensation when it announced the launch of the full-size hybrid Chevrolet Tahoe and GMC Yukon SUVs and the Silverado hybrid pickup at the Los Angeles Auto Show in November. Chrysler followed with news that the system will also be offered in the Chrysler Aspen and Dodge Durango full-sized SUVs and the Dodge Ram pickup.

At the Detroit Auto Show in January, the third member of the two-mode hy-brid consortium showed off its vehicle. BMW displayed the Concept X6 Active Hybrid SUV.

The system is built into the case of the new electrically variable transmission (EVT), which is no larger than a normal automatic transmission. Inside, however, are two electric motors and two gear sets. The modes blend continuously variable operation (for low-load, low-speed driving situations) with fixed-gear operation (for high-load conditions such as towing or highway driving).

A computer, called the hybrid operating system (HOS) manages the distribution of gasoline and electric power to where it is needed for most efficient operation. The system includes three major components:

The EVT functions are controlled by the HOS, which constantly searches for optimum transmission operation to meet current conditions. The HOS also bases its decisions on allowing the gasoline engine to take full advantage of its cylinder deactivation system to remain in reduced-cylinder mode as long as possible for maximum fuel economy.

While the gasoline-only versions of the two-mode hybrids also offer cylinder deactivation, the hybrid system allows the vehicle to run in reduced-cylinder mode more often and for longer periods — because of the boost from the electric motors. This is the key to the hybrids' 25- to 30-percent improvement over the gasoline-only models in combined city/highway fuel economy.

The HOS determines which mode powers the vehicle at any instant. It con-stantly receives torque data from the powertrain and other vehicle systems, determining the most efficient means of driving the vehicle — electric power, gasoline power, or a combination of the two. The EVT is similar to having two transmissions in one — continuously variable drive for light-load conditions and fixed-ratio drive for high-loads.By locking the first motor, the HOS keeps the output shaft operating at the same speed as the input shaft — basi-cally the same as used by most current hybrid vehicles. This provides either high fuel efficiency or high power, but not both. For this reason a second mode, which adds another motor and other hardware to the system, was developed.

A Mode for Every Purpose

The two-mode system arose because engineers found that, especially in trucks and SUVs, a single drive mode does not fit all the vehicle's uses. These include city driving, hauling heavy loads, and towing heavy trailers. The system pro-vides optimum gearing for any purpose.In mode one (M1), the EVT provides infinitely variable drive up to a 1.70:1 ratio, while mode two (M2) provides ratios from 1.70:1 to 0.50:1. These modes include electric-only and electric-gasoline hybrid operation. Depending on driving conditions and load, a fixed first-gear (G1) ratio of 3.69:1 is available (such as for pulling a large trailer) instead of the variable M1 ratios.

Also, a second-gear (G2) fixed ratio of 1.70:1 may be selected by the HOS, if needed, before entering into the variable M2 ratios. As road speed increases, and depending on driving and load conditions, variable-ratio M2 operation can be switched instantly to a third-gear (G3) fixed ratio of 1.00:1, and finally to a fourth-gear (G4) fixed ratio of 0.73:1, mainly for highway cruising.

During operation, the HOS searches for the drive ratio — variable (M1, M2) or fixed (G1-G4) — which allows the gasoline engine to operate in its most efficient mode. (Reverse is always elec-tric-only, though the gasoline engine may still run, depending on conditions.)

When towing at low speeds and from a stop, the HOS can apply full engine torque as well as electric motor-assist for additional pulling power. This gives the two-mode hybrid models greater towing capacity than other hybrid pas-senger vehicles on the market.

Providing power to the EVT's two electric motors is a 300-volt nickel-metal hydride energy storage system (ESS), or battery pack. This is located under the second-row seat in SUVs, where it takes up virtually no extra space and does not interfere with accessibility.

The primary function of the ESS is to provide power to the EVT and store captured energy during regenerative braking. The ESS can also be charged, when necessary, by one of the electric motors in the gasoline engine operating in generator mode.

In addition to supplying power to the EVT, the ESS also powers the air conditioning compressor and the accessory power module (APM), which converts the high-voltage supply to 42 volts for the electric power steering system and 12 volts for the vehicle battery and other 12-volt electrical accessories.

Battery pack durability and reliability is maintained by optimizing charge and discharge cycles, as well as by a dedicated cooling system that draws air from the passenger compartment. As part of the vehicle's emission control system, the ESS is warranted for eight years/100,000 miles.

A full hybrid, the two-mode hybrid system uses regenerative braking to cap-ture energy otherwise lost during vehicle deceleration. By using one or both traction motors as a generator, braking energy is converted to electrical energy and stored in the ESS for future use to propel the vehicle.

The regenerative brakes are used with the standard hydraulic brakes to slow and/or stop the vehicle. Depending on the amount of braking required, the hydraulic brakes may not be used, as when slowing to allow for merging traffic near a highway on-ramp.

When additional braking is needed, based on a change in the position of and/or the force applied to the brake pedal emulator, the hydraulic braking system assists the generator(s) in slow-ing or stopping the vehicle. The ABS/electronic stability control (ESC) modulator used on these vehicles has been modified to allow interaction between the hydraulic brakes and the regenerative braking system.