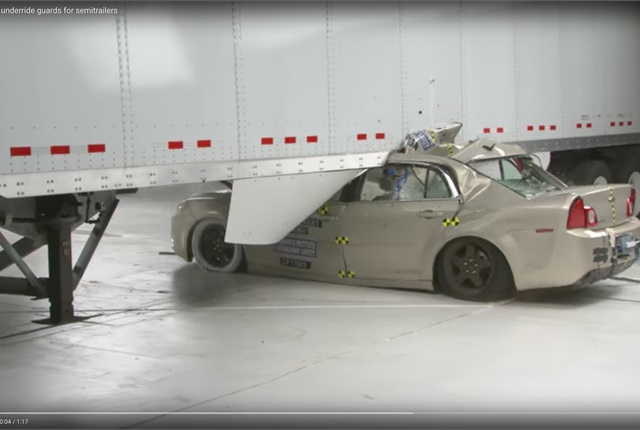 VIDEO: Benefits of Side Underride Guards

Strong underride guards on the rear of tractor-trailers have helped prevent underride in previous crash tests by the Insurance Institute for Highway Safety, and the institute’s new tests also show how a well-built guard can prevent a passenger vehicle from sliding beneath the side of a semitrailer.

IIHS tests conducted this spring marked the first time the institute has evaluated a side underride guard. IIHS ran two 35-mph crash tests: one with an AngelWing side underride protection device from Airflow Deflector Inc. and a second test with a fiberglass side skirt intended to improve aerodynamics, not to prevent underride. The results were dramatically different, IIHS said.

In both tests, a mid-size car struck the center of a 53-foot-long dry van trailer. In the AngelWing test, the underride guard bent but didn't allow the car to go underneath the trailer. As a result, the car's air bags and safety belt could properly restrain the test dummy in the driver seat. In the second test with no underride guard for protection, the car ran into the trailer and kept going. The impact sheared off part of the roof, and the sedan became wedged beneath the trailer. In a real-world crash like this, any occupants in the car would likely sustain fatal injuries, according to IIHS.

A 2012 IIHS study found that strong side underride guards have the potential to reduce injury risk in about three-fourths of large truck side crashes resulting in a fatality or serious injury to a passenger vehicle occupant. This proportion increased to almost 90% when restricted to crashes with semitrailers.

Federal law requires large trucks to have rear underride guards but not side underride guards. At least three U.S. cities — Boston, New York and Seattle — mandate side guards on city-owned or contracted trucks as part of Vision Zero initiatives to eliminate crash deaths and injuries, particularly among pedestrians and bicyclists.

“With the rise of injuries and fatalities due to truck crashes, along with the need for greener technologies, Airflow Deflector's AngelWing side underride guards are an integral part of a long-term eco-friendly and cost-effective safety strategy that will benefit the public at large,” said Robert Martineau, president of Airflow Deflector.