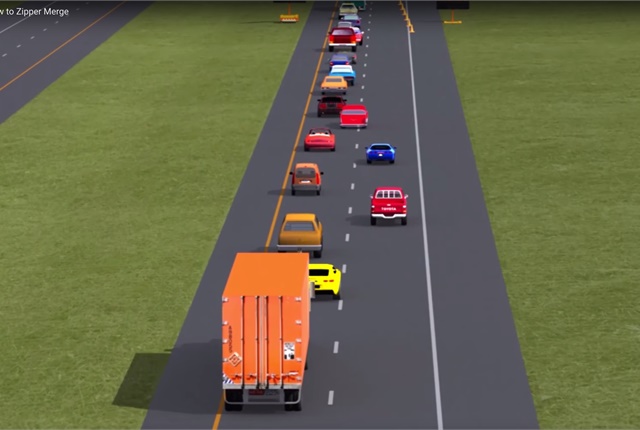 VIDEO: How to Zipper Merge

Missouri and Kansas have joined Minnesota and Washington in promoting use of the zipper merge — a merging technique aimed at preventing both traffic bottlenecks and crashes near work zones.

When employing the zipper merge, motorists don’t immediately merge when approaching a work zone lane closure. Vehicles continue using both lanes of traffic until reaching the designated merge area. Then, vehicles in the closed lane alternate entry into the open lane.

Of course, most drivers were taught to use the early-merge method: If your lane is closed up ahead, try to merge as soon as possible. Don’t wait until the last moment – that’s rude.

When traffic is buzzing along at highway speeds, early merging is fine. But studies have demonstrated the shortcomings of the early-merge method in heavy traffic. It can lead to fender-benders and long traffic delays. In contrast, the zipper merge promotes greater safety by reducing differences in speed between the two lanes and creating a more orderly process for taking turns in merging, supporters argue.

The zipper merge cuts the overall length of traffic backup by as much as 40%, according to the Minnesota Department of Transportation.

But convincing drivers to change their habits is never an easy task, so Missouri and Kansas launched promotional campaigns — both using a lighthearted touch. To watch the Kansas video on how to zipper merge, click on the link or image below the headline. To watch the Show Me state’s quirkier video, which features commentary from experts far too young to drive, click here.