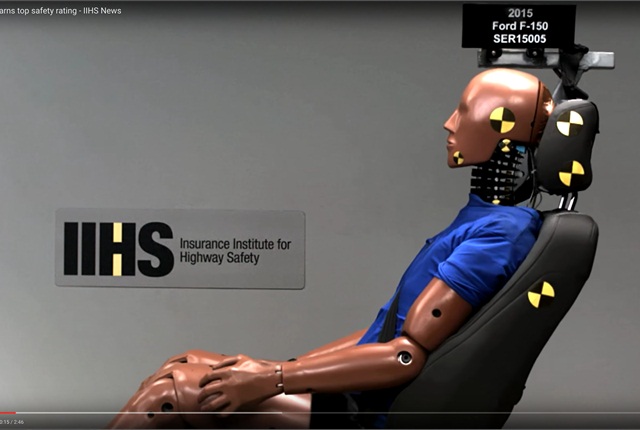 In a recent round of crash tests by the Insurance Institute for Highway Safety, the Ford F-150 SuperCab was the only large pickup truck to earn “good” scores across the board in the small overlap front crash test and qualify for the Top Safety Pick award.

Three other trucks — the Chevrolet Silverado 1500 Double Cab, GMC Sierra 1500 Double Cab and Toyota Tundra Double Cab — earned “acceptable” overall scores in the challenging small overlap front crash test, IIHS said. This test replicates what happens when a vehicle runs off the road and hits a tree or pole, or clips another vehicle that has crossed the centerline.

IIHS evaluated two body styles of each 2016 model-year pickup — crew cab and extended cab. The institute decided last year it would test the two most popular variants of large pickups instead of just one.

“Ford is leading the way among large pickup manufacturers when it comes to protecting people in a range of crashes and offering technology to warn drivers of imminent frontal crashes,” said Raul Arbelaez, vice president of the IIHS Vehicle Research Center. “We commend Ford for taking last year’s test results to heart and upgrading protection for SuperCab occupants in small overlap crashes.”

The 2015 Ford F-150 SuperCab had drawn a "marginal" overall rating in the small overlap crash test.

To learn more details about how the other large pickup truck models fared during crash tests, click on the photo or link below the headline to view a video report from IIHS.

IIHS said it plans to test the redesigned 2016 Nissan Titan and Honda Ridgeline later this year.