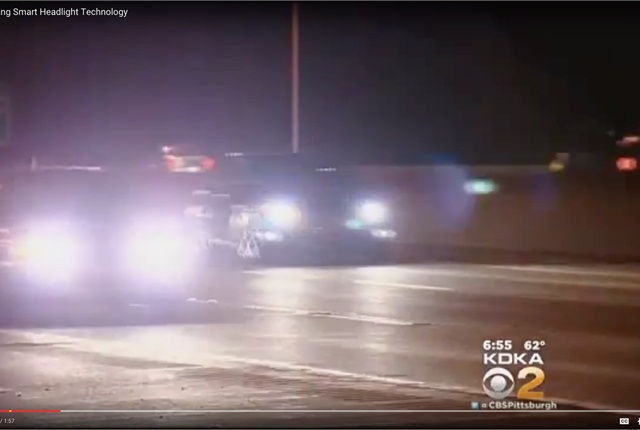 Headlight glare has drawn the ire of drivers for more than a century, but the problem seems to have grown worse in recent years for a number of reasons.

More and more pickup trucks and SUVs ride higher off the ground and, as a result, their headlights are more likely to shine directly into the eyes of other drivers. Secondly, more vehicle models are using high-intensity discharge (HID) lights, which emit twice the light of halogen headlamps but produce a blue-white light. Also, more vehicle models have fog or other auxiliary lights in front – and unfortunately, these lights often become misaligned over time.

In fact, misalignment is a problem that affects more than just fog and auxiliary lights. Studies suggest that nearly half of vehicles in states that require inspections have at least one off-kilter headlight, according to the AAA Foundation for Traffic Safety. Vehicles more than five years old are two times as likely to have misaimed headlights compared to new vehicles. Misaligned lights are a major contributor to the headlight glare problem.

Another factor is driver distraction. A driver preoccupied with a phone conversation, for example, is more likely to absentmindedly forget to turn off high beams.

Demographics also play a role in how the problem is perceived. Middle-aged and older drivers are more sensitive to headlight glare because their eyes adjust more slowly to changing light levels. Also, drivers who have light-colored eyes or who have had LASIK eye surgery often find headlight glare more troublesome. Further, hypersensitivity to headlight glare can be an early warning sign of a vision problem such as cataracts or macular degeneration – conditions that require medical attention.

What about those tinted night-driving glasses and visors you see advertised online and on TV? Do they help?

They’re a bit controversial and have drawn mixed reviews. AAA has advised against their use, asserting that these products reduce night vision overall – not just glare.

On the other hand, many ophthalmologists and optometrists recommend eyeglasses with an anti-reflective (AR) coating to reduce nighttime glare.

The good news is that technology figures to address at least some of the causes of headlight glare in the not-so-distant future. To view a video about smart headlight development at Carnegie Mellon University, click on the photo or link below the headline.

To help diminish nighttime glare, drivers need to make sure their windshield (both sides), mirrors and their own headlights are kept clean. It’s also a good idea to periodically clean wiper blades, and worn-out blades should be replaced.

Adjust Both Outside Mirrors

Properly aligned mirrors not only reduce blind spots, they also reduce glare from vehicles behind you. While sitting in the driver's seat, lean to the left and tilt your head until it rests against the window. From that position, adjust the driver's side mirror so you can just see the left rear corner of the vehicle.

When oncoming vehicles shine light directly into your eyes, turn your gaze to the white line on the right side of the road, or to where the pavement meets the shoulder, until the vehicle goes by.

Use the Rearview Mirror's "Night" Setting

All cars have day/night interior mirrors to reduce glare from cars directly behind you. You can usually change the mirror to its "night" setting by flipping the small lever at the bottom of the mirror.

Proactively Use Your Headlights

Headlights should be on at least one hour after sunrise and one hour before sunset. Lights should be turned on during a cloudy or rainy day. Make sure that all lights are functioning properly.

To minimize the challenges of driving at night, AAA also recommends these measures:

Keep your eyes moving. Don’t focus on the middle of the area illuminated by your headlights. Watch for sudden flashes of light at hilltops, around curves or at intersections. These may indicate the presence of oncoming vehicles.

Look at the sides of objects. In dim light during reduced visibility, focus on the edges or outlines of objects. Your eyes can pick up images more sharply this way than by looking directly at the object.

Protect your eyes from glare. Prolonged exposure to glare from sunlight or headlights can temporarily affect your visibility at night. It can also lead to eyestrain and drowsiness. Wear good sunglasses on bright days and take them off as soon as the sun goes down. After steady daytime driving, rest awhile before you begin driving at night. At night, look to the center of your pathway and use the painted edge lines to guide your vehicle.

Avoid being blinded by oncoming high beams. If the driver of an oncoming vehicle fails to dim the lights, look down toward the right side of the road to avoid being blinded. You should be able to see the edge of the lane or the painted edge line and stay on course until the vehicle passes.