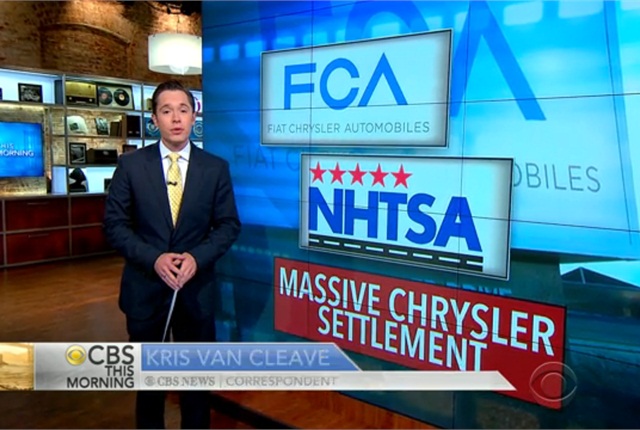 As part of an agreement reached with federal safety regulators, FCA US (Fiat Chrysler Automobiles) will pay as much as $105 million for violations of the Motor Vehicle Safety Act’s vehicle recall requirements.

Additionally, the automaker has agreed to rigorous federal oversight for the next three years and will buy back some defective vehicles from owners, according to the National Highway Traffic Safety Administration. Oversight requirements include hiring an independent monitor to evaluate and report on the company’s recall performance. This independent monitor is subject to NHTSA approval.

In the consent order, FCA US acknowledged violating the Motor Vehicle Safety Act in three areas: effective and timely recall remedies, notification to vehicle owners and dealers, and notifications to NHTSA.

The consent order requires FCA to notify vehicle owners eligible for buybacks and other financial incentives that these new options are available.

The buyback option will be made available for unrepaired vehicles covered in three previous recalls issued back in 2013:

The consent order allows FCA US to remedy and resell any vehicle repurchased as part of this arrangement.

FCA US, however, estimated that more than 60 percent of the vehicles covered by the three recalls have already undergone the approved recall repairs and, as a result, don't qualify for the buyback option. That leaves less than 200,000 eligible vehicles, the automaker said.

"With respect to the 1993 through 1998 Jeep Grand Cherokee ZJs, FCA US is also offering to increase the trade-in allowance to be applied to the purchase of another FCA product, service or parts for those owners of these very old vehicles who would prefer this alternative over the installation of a trailer hitch," FCA US added.

FCA US has also vowed to improve its overall vehicle recall processes.

“We also accept the resulting consequences with renewed resolve to improve our handling of recalls and re-establish the trust our customers place in us,” FCA US said in a released statement. “We are intent on rebuilding our relationship with NHTSA and we embrace the role of public safety advocate.”

The announced consent order follows a July 2 public hearing, during which NHTSA officials testified about problems with 23 FCA US recalls involving more than 11 million vehicles.

“Fiat Chrysler’s pattern of poor performance put millions of its customers, and the driving public, at risk,” NHTSA Administrator Mark Rosekind said. “This action will provide relief to owners of defective vehicles, will help improve recall performance throughout the auto industry, and gives Fiat Chrysler the opportunity to embrace a proactive safety culture.”

The consent order calls for a $70 million cash penalty and an additional $20 million payment to meet performance requirements outlined in the agreement. This $20 million includes all premiums paid to repurchase vehicles and to provide customer incentives.

Another $15 million may be charged if the independent monitor uncovers further violations of either the Safety Act or the consent order, NHTSA said.

To view a CBS News report on the agreement, click on the link or photo below the headline.